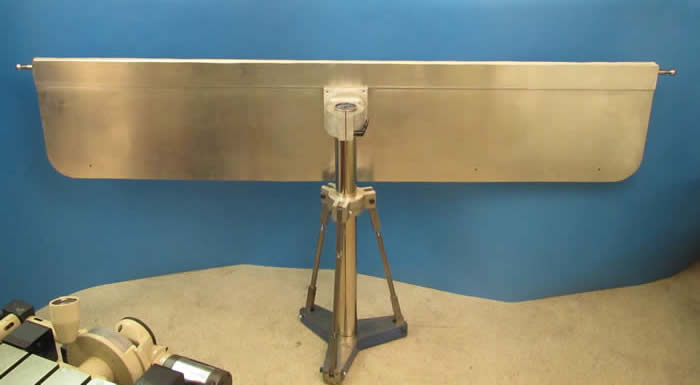 We have solved the age old problem of how to apply very long artifacts to the purpose of measuring-machine calibration.

These calibrations are now being reliably done by changing the very concept of how such large calibration artifacts are supported for their measurement.

At least since the time of Lord Kelvin and Clark Maxwell, science has been obsessed with the concepts of kinematics. This is the principle that states that a rigid body has six and only six degrees of freedom.

According to their rules there is only three conditions for a rigid body: under-constant, proper-constraint, and over-constraint.

What occurs in the real world is that there is no such thing as a rigid body, so there is in fact seven, not six, degrees of freedom. What emerges is that elasticity is, in fact, the seventh degree of freedom that must be coped with.

By thinking on a different level, we have introduced the concept of “UNISTRAINT.” This different approach is used to cope with the problem of properly supporting really large artifacts.

In this approach the artifact and the structural support become one monolithic entity.

The big bertha of this monolithical approach is the use of the fundamental concept of structural support “sheets” to produce a device with no appreciable length variation when moved to the various positions from vertical to horizontal. The sheets prevent bending in the vertical plane.

By combining several, individual, large and thin sheets of light weight structural metal, enormous rigidity has been achieved within a two and one third-meter artifact that can be picked up with one hand.

The finishing touch is to combine an invar artifact, with its nearly zero thermal coefficient of dimensional change, with the light-weight aluminum structural-member. This combination achieves “UNISTRAINT," by supporting the artifact not by six points, to be kinematically correct, but by literally millions of points through the use of an extremely rigid (25,000,000 PSI) structural foam, to literally achieve UNISTRAINT. What it comes down to is that if it doesn’t bend, it doesn’t matter.

For calibrating Articulating Arm measuring machines, a standard one-inch diameter high-quality hard stainless-steel ball is usually used on each end of the artifact. And the articulative arm measuring-machine is usually outfitted with three-ball kinematic “Kelvin” clamp probe, instead of the standard single ball probe.

Our three ball probe which is part number 3B-KP is highly recommended as the means of contact with the test spheres (see our literature on this website.)

For Laser tracker calibration, each end of the UNISTRAINT is equipped with a magnetically preloaded, three ball Kelvin clamp. This arrangement will very precisely position the SRM for precise measurement by the Laser Tracker.

For very large field-optical scanners, the UNISTRAINT is outfitted with one of the satin finished balls in a diameter that is compatible for the scanner being evaluated or the laser tracker setup can be used with our INTEGRATION SPHERES.

Typically, when large calibration artifacts are positioned at an angle to the pull of gravity, it is almost impossible to clamp them tight enough to hold them in a permanent location. The extremely long lever that is created by the large size of the artifact will cause a small, very slow drift, as the artifract seeks mechanical equilibrium. 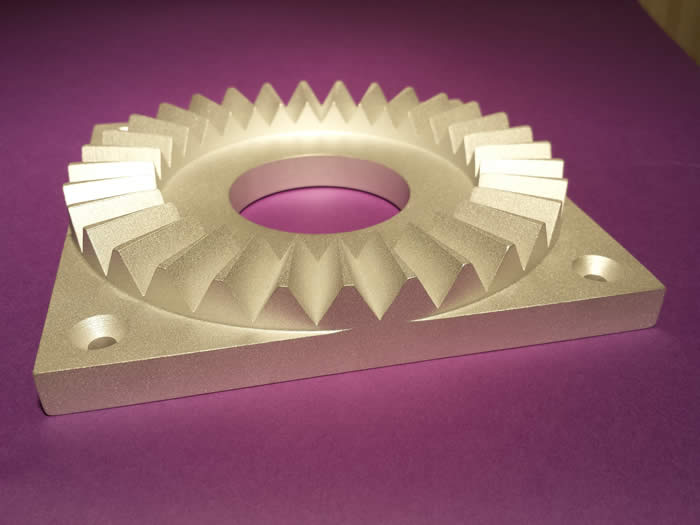 To eliminate this problem at its origin, the rotating joint of the UNISTRAINT is built as an integral HIRTH coupling. The two sets of miter gear like teeth, intermesh with each other to create a beartrap-like clamp that doesn’t allow even micro-radians of rotation. 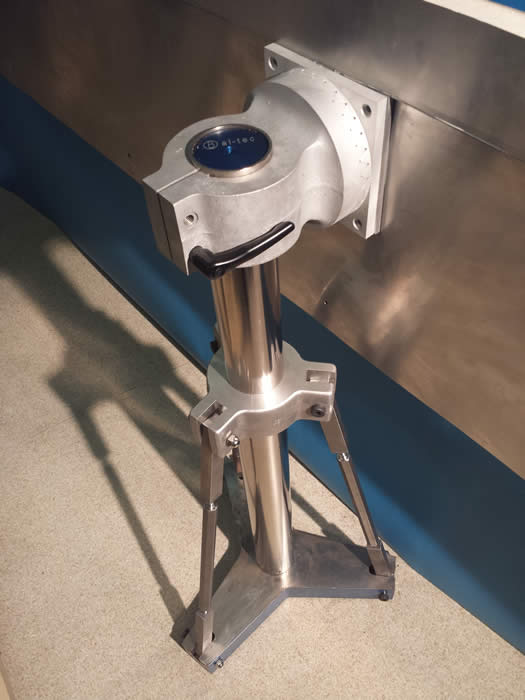 The result is the UNISTRAINT, a monolithic calibration artifact that will not bend, can be positioned in multiple orientations without worry, and can be moved and positioned by one person.