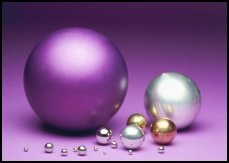 Statistics are based on a lack of causality. There are a large group of you who will get this stuck in your throat, but it is a fact none the less. X-bar and bell-shaped curves are caused by uncontrolled variables.

I had an old acquaintance of mine approach me at an engineering conference. He wanted me to make him a set of 64,000, three-sixteenths of an inch diameter balls that were all exactly the same size, within three-millionths of an inch.

He was a professor at one of the most prestigious universities in our country. We received the order and produced the balls. We used simple sampling techniques to evaluate the results, and we routinely shipped him the product.

A year later at this same conference the professor approached me, he was very animated. How in the world did we cull out such perfect balls?

I explained that we had only measured a small sample. I told him that at this level of accuracy it was very hard to even measure the balls without potentially degrading the surface quality. I told him that we threw away the sample balls that we had measured just in case we had damaged them by our measuring.

First he told me that a grad student of his had spent four and one-half months measuring every single ball by hand. Every single one of the 64,000 balls were well inside the three-microinches limit that he had specified.

He then proceeded to explain to me that he was a statistician and that what I was telling him was impossible. He suggested that I had a secret process that I used to cull out the less than perfect balls and that if he knew how to do it he wouldn’t tell any one either.

Will this heresy never, never end? Is ball manufacturing the only exception to the universal rules of statistics?

Rather than thwarting the fundamental rules of statistics, ball manufacturing uses them, and in doing this we frustrate and alienate every practitioner of quality control that we come into contact with.

We don’t just mollify conditional probability and random variables, we use them to destroy themselves.

Let’s say we have normal distribution of ball sizes going into a ball grinding machine. We distribute these grossly imperfect balls between two very flat very stiff plates, with an abrasive material. It would be blatantly obvious that out of all of the balls, the three largest balls would be the only points of contact and that they would support the entire weight of the upper plate and that those three balls would be abraded down first. Soon there would be four, five, six, ten, one hundred balls that would be the same size.

Using Chebyshev’s theory of distribution probability, and intentional random intermixing, the very principals of statistics are used to eliminate variability.

The reason that we have such a problem with the quality establishment is that they can not recognize a process that literally flies in the face of every Juran principal.

A ball, although it is three dimensional, only has one dimension--the radius of the ball, all the way down to the nanometer level.

How do we answer a customer’s request for a first article? The balls, that are all, every single one of them, in a circulating and recirculating mass. The high points on any of the mass of balls receive extra abrasion due to the extra force applied to them by the grinding tools. In the same fashion, the most minute imperfection of the grinding tool sees more pressure and therefore more wear, until the geometry of the grinding tools are near perfection.

We are constantly asked where are the records? Where is the paper trail? What do we record? That the balls aren’t round yet or that the balls aren’t to size yet. The longer you run them the better the geometry becomes; and the longer you run them, the smaller the diameter becomes. There are no stops, there are no compensations, and temperature doesn’t have any effect on the process. The machines go so slow and they are so massive that vibration, short of an earthquake, has no effect on the ball quality.

It takes eight to sixteen weeks to produce a finished ball, depending on the size, the material, and the finished quality required. The yield from a full-sized production run of balls can be up to 500 pounds, so the process although quite time consuming is actually very productive.

When all is said and done maybe three-microinches or three-nanometers is the width of the bell curve, but the point here is that variability even at this microscopic level, has a specific cause.